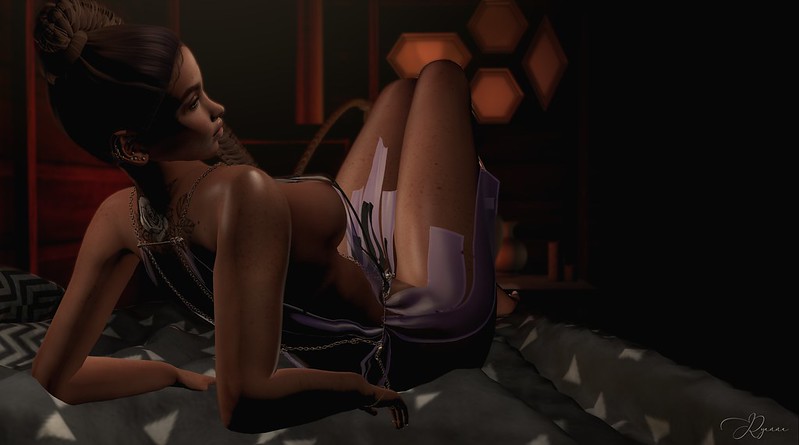 He had been away for a while. Business, of course – that was the one thing that always kept them separated. They spent the time apart connecting over video chats and messages now and then, but it was never enough. She missed him more than she let on during their conversations. If she admitted the truth to herself, it would only make way for other emotions to rise to the surface, and that was something she didn’t want to risk. It was easier to lie to herself.

Over the past few days, her mood had been rather somber as she dealt with sudden issues that had arisen. When they spoke, and he asked how things were, she didn’t tell him of the troubles. No need to bother him with it, she had told herself. No need. The conversation was kept light and speckled with banter. Everything was as it should be.

Imagine her surprise when there was a knock on her door a couple of days later. She had gotten home not long ago from work when she heard the knock. Strange, she wasn’t expecting anyone.

“One moment!” She called out as she made her way to the door. When she opened it, what she saw on the other side she almost didn’t believe. Her mouth stood open.

There he was, leaning on her doorframe with a smug look on his face and a bag in one hand. “I just flew twenty-thousand miles to tell you, in person, that you don’t listen,” he said.

The look on her face made him smile. He pushed forward and cupped her gently – yet with authority – under the chin before he kissed her. “See,” he said afterward with a smirk. “You don’t listen.” He let her go and shouldered his way into her apartment, offering the bag he carried. “For you.”

She watched him as he took off his jacket and strolled aimlessly about the living room. How was he here? Why was he here? Though she was curious, it paled to the thrill she felt at his presence. She closed the door and began walking towards him, head down as she looked in the bag. It was an outfit. Before she could say anything he spoke, “You thought I wouldn’t know what was going on with you? That you needed me?” If she didn’t know better, she would have thought there was a hint of sadness in his tone.

She looked up and saw his eyes set on her. “Let me make it better,” he continued. He knew. The fact that he knew without her saying anything spoke volumes. Her hands tightened around the bag and she drew in a slow breath. A thousand thoughts crossed her mind and then everything clicked into place.

A smile spread across her lips, the type that held laughter at bay. “You’re impossible, you know that?” She laughed a bit and exited to her bedroom. He didn’t follow, which worked perfectly for she wanted to have a moment to dress in his gift and collect herself.

It was pretty – what he had gotten her -even though there wasn’t much to the outfit. Strips of thin lace were held together by thin gold chains. Ordinarily, something like this would have caused her to blush uncontrollably, and she wouldn’t dream of putting it on. But she did put it on and, as she studied herself in the mirror, she felt confident and strong.

She scooted back on the bed and cleared her throat, calling out to him, “Are you coming?” . . .