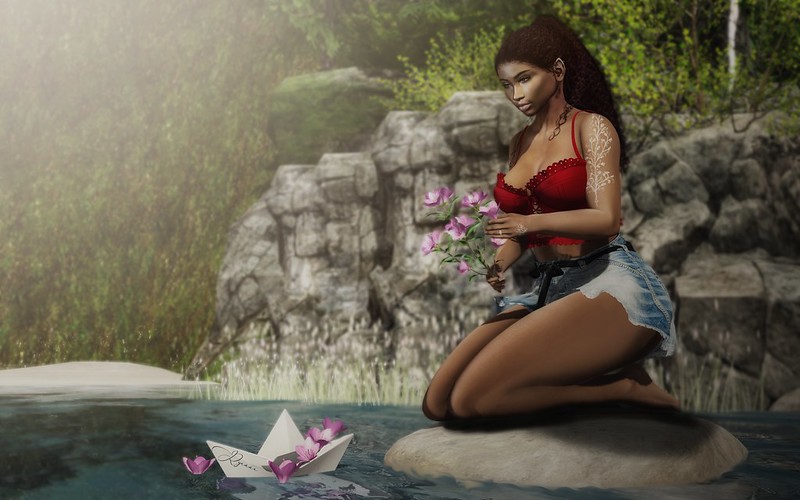 She sat by the riverbank fiddling with a sheet of paper in her hands. Bright pink flowers that she had picked earlier rested at her side. There had bene a lot of things on her mind recently – more than usual – and they all centered around one person in particular. Usually the memories were fleeting, coming and going within seconds, but lately they have been lingering.

Even as she sat there she heard his laughter and turned her head down as she saw him roll his eyes at her again and end it with that trademark smirk. Her skin prickled when he placed his hand on her shoulder. Perhaps she was loosing her mind. These memories were so vivid and clear. She would swear he was standing right there.

It’s strange how things work. Some time she had it all together, and then there were times where she couldn’t sleep for days or even weeks at a time. Still, she was miles from where she was before, yet for some reason, memories and feelings were crashing in on her like a tidal wave. One of them stuck out the most: it was the last time she saw him. He had kissed her on the forehead and said he’d see her tomorrow before he turned and walked out the door. How could she have known that would be the last time she’d see him alive.

“You made a man this fragile. You made a heart that can break. . .
You make me love so hard when everything I love just leaves.
Are you sure there’s nothing wrong with me?”

She sighed as she looked out across the water. The paper she had been holding was now a boat. Paper boats – that was one of their ‘things’. They would make the boats and race them down the river at the park.. He always won.

People had been worried about her after he passed, but she put on a brave face and carried on, never fully dealing with it. Truth was, that not dealing with it was crippling her in ways she couldn’t explain. Maybe this year she would be able to face her feelings and thoughts and process them instead of running from them.

“I know this ain’t for nothing. There’s nothing You don’t make.
I know You got Your reasons, this sh*t’s just hard to take.
I don’t mean to criticize You, I know I’m hard to teach.
I know you tell me there’s nothing wrong with me . . . “

She set the boat in the water and placed a few flower petals on it. Afterwards she gave the boat a small push and sat back to watch it slowly drift away. Softly she whispered to herself, “I still miss you . . .”