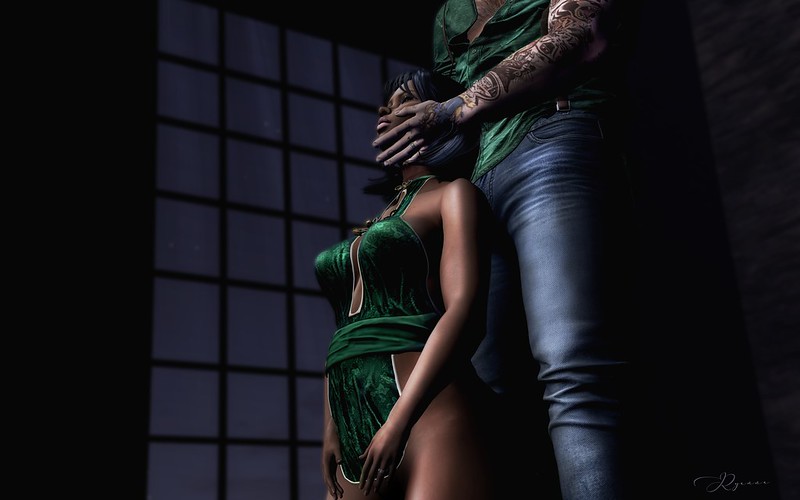 From down the hall the old grandfather clock ticking. With all the lights being off in the house, the sound seemed to be louder. The rest of the house was quiet and the ticking echoed through the corridors. The sound drifted up to the near empty room on the second floor of the house. This is where knelt on the floor by the window. She was waiting for him.

Earlier that day he had called her. There was a package outside of the door. She was to open it and follow the instructions written within. The idea had intrigued her and caused a smile to tug on her lips.

That was a few hours ago, but, by the sound of the clock she knew what time it was and he would be home any minute now. She was right. Shortly afterwards she heard the door open and his keys jingle as they were placed in the bowl in the foyer. After that came the unmistakable rhythmic pattern of his walk as he came closer to where she waited.

She licked her lips and drummed her fingers on her upper thighs, the outfit he had gotten for her now feeling too tight. The footsteps were closer. The door to the room opened and she sat up straighter and barely dared to breathe. Though she wanted to turn her head and look at him, or even say something, she didn’t for that wasn’t part of her instructions.

Feeling her heart beating in her throat she closed her eyes and exhaled slowly. It was then that she felt his warm fingers along under her jawline. He said nothing for a while. Just when she thought anticipation and curious anxiety were going to overcome her, he spoke. “Good things come to those who wait.”

Pose is Synnergy// All Mine @ MIIX Event Exclusive