The world is so diverse and the multitude of people – with their varying thoughts and ideas – help make the world go around. We have big dreams and wild imaginings, but if we are not careful, society will seek to diminish them.

From the way we look, to the state of our living conditions, the world sees us and instantly draws their own conclusions. We get told that our dream is too big. Or that we don’t really want to do this, here is something more reasonable. These words can come from anyone: family, friends, or even those who think they know us.

People have an inborn desire to fit in and be accepted, many let go of their dreams and settle for the next best thing because that will gain the approval of the ones around them.

Great things didn’t come from the people who sought to fit into another persons vision. The  wonderful things that we have now didn’t come about because someone gave up on their dream. If the people you associate yourself with are not pushing you to do better – in whatever aspect of your life – then perhaps it’s time to change.

Don’t abandon your wants because those around you don’t understand it. Find those that do. Find someone who’s doing what you want to do, who has dreams as big -or bigger- than your own, or even those who may not have big dreams but cheer you on towards your own, and you associate with them.

If the people in your life are not going to bring out the best in you, then why are you spending your time on them?  We never forget how to dream, or how to imagine great things, we only have a tendency to let others dictate the way our lives should go.

It’s your dream, not theirs, and you have a right to it.

Every culture has its fairy tales – stories of impossible things where the odds are stacked high, yet the hero triumphs in the end. These are the stories that give us hope. They seek to inspire the readers into thinking that no matter how bad the situation, everything will work out.

But not all fairy tales have a happy ending. Sometimes the protagonist doesn’t make their goal. Sometimes evil actually wins.

When the story doesn’t end the way we think that it should, does it mean that it didn’t teach us anything? Are we often too busy trying to find the ‘happily every after’ that we don’t pay attention to the lessons that are being taught?

The point of a story is to teach a lesson – to open our eyes to concepts and ways of thinking that we may not have otherwise thought. Each day we are filling the pages of our own storybook. We are writing our own fairy tale.

Life can be a fairy tale, and though they don’t all have a happy endings they all teach a lesson.

Shot on location at: *StoryBrooke Gardens* When one door closes, another one opens. That’s the old adage that gets frequently tossed around. People tend to say it as a way of justifying why they didn’t get what they wanted and to signify that they have moved forward. It sounds good in theory – moving on – but many people say that they’ve closed a door, only to have leave a small stopper in place to keep that very door from closing all the way.

Who knows, maybe they may need to go back.

“I’ve closed that door, and I’m not going back,” comes a persons bold proclamation. A few weeks later and you see them peeking through the crack that they left, relishing in what they professed to have left behind.

Mirrors. They take what is given and spit it back out. This causes the viewer to examine what they are portraying. There are tales about mirrors reflecting the contents of a persons soul, and that’s why – when a person does a deplorable act – they can’t look at their reflection.

Having done, or said, something against their own moral code that they are unable to recognize the person staring back from the other side of the mirror. So the mirrors get covered up so the reflection can’t be seen. Or, when faced with the reflection – this stranger wearing our face – the mind warps it into what we deem right.

Don’t close any doors if you’re going to leave a crack, and don’t do anything that turns your own image into something you can’t face.

Life is full of things that cause us to slip and fall. But, if you’re not careful you may find yourself lost in a room of mirrors and doors where everything you said you were leaving behind is being reflected back at you.

Have you ever had a dream that was so wonderful you didn’t want to wake up? This dream of yours is full of all the wonderful things you keep hidden in your heart.  Secret things that you dig up to make you smile when things are not going as planned.

These are the dreams that are so strong that they feel tangible. The ones where, even in dream, we can swear that we feel everything.  All of our senses come to life and suddenly it’s not a dream anymore, but a reality that we’ve built up inside our head.

What happens when the reality of the dream begins to mesh with actual reality? The real one where the things of your dream do not exist. What happens when your senses can vividly remember how things felt, how they tasted, how they smelled? 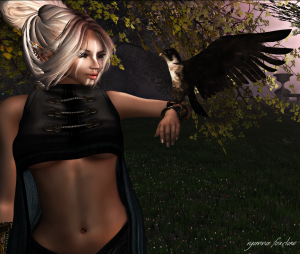 But you’re awake now. What you felt doesn’t exist.

This is when you go back to sleep.

This is the dangerous part.

The part when the dream is the reality, and reality’s the dream.

Once upon a time, I had a dream.  A dream so wonderful that I didn’t want to wake up.

Shot on location at Obsession Exposed

Sometimes the battle you’re fighting, is not for you.

Does this mean that we shouldn’t participate? How much simpler would our lives be if we choose to stick to our own business and involve ourselves in the dealings of our neighbor?  Would it make us a bad person to know that our friends, or loved ones, are struggling with something but, for the sake of our sanity and peace of mind, we turn a blind eye to it?  And those times when we do get involved, does it make us nosy?

Sometimes the battles we find ourselves in have nothing to do with us – but the way we choose to fight them does. Why did you get involved? Why didn’t you get involved? How far are you willing to go on the path that you have chosen?

Sometimes the battle is not our own, but we find ourselves the unwilling participants of the debacle. We are left standing in the middle of a battlefield. We may even feel forced to pick a side, or run ourselves ragged in attempts to keep the peace. Often times we forget that choosing to do for ourselves is also an option.  It’s not always about choosing between the offered options of other people.

Pose: from An lar [poses]  – The Sought After Series @ ROMP – January

Inside each and every one of us is the power to change. The power to break free of the thoughts acting as debilitating anchors.

How can I be happy when there’s so much sadness around me?
How can I be strong when everything keeps beating me down?
How can I go on when no one seems to care?

Change your way of looking at things. Change the way you think. Stop saying that things are easier said than done. Stop saying “If only this, then that.”

Stop looking for reasons as to why you can’t, and realize all the reasons you can.

A new year is approaching fast.  Isn’t it time you start believing in who you are and what you can do? Not what society, your friends, your family, says what you should, or shouldn’t do.  They are not you, and they never will be.

Take a breath and set yourself free.

“Don’t you know what’s out there in the woods….”

The time was approaching midnight and she couldn’t take it anymore.  She tossed on a shawl, picked up the lantern, left her home, and headed out into the woods.

“…Sometimes a spell may last, past what you can see, and turn against you. Careful the tale you tell…”

The woods were dark and the light mist which rest over the ground did nothing to soothe her rising anxiety. This was silly, she thought to herself. Surely this is pure nonsense to be walking about in the woods at this hour. I should go back.

No matter what she thought to do, her feet wouldn’t listen.  They had adapted a mind of their own and kept her moving forward down the path. Towards the pull.

“Nothing’s all black, but then nothing’s all white. How do you say it will all be all right…”

It wasn’t long before she saw a shadow of someone leaning against a tree.  It was then that her feet stopped.  She had arrived at her destination.  Straining to see into the darkness, she held up the lantern. “Hello?” she called out. “Who’s there?”

The shadow moved and stepped into the light. Her eyes widened as she recognized the man that was walking towards her.

“It took you long enough to get here,” he said in a smooth and mellow tone.

She lowered the lantern slightly, but kept it out as a barrier between the two of them. “I don’t think I had much of a choice,” came her reply.

A smile peeked at a corner of his lips and he reached for the light and took it from her hand. “You’re right.  You didn’t.”  He sat the lantern down upon the ground and held both of her hands while maintaining eye contact.

At first, it was unnerving, having him so close to her and she wanted to leave.  But, as the moments drifted by and he made no other move than simply holding her hands, a sense of calm washed over her and she sighed. She asked him softly, “What do you want?”

“Correction,” he replied with a full grin now upon his face. “The question is what do you want.”  He raised one of her hands up to meet his lips.  Her eyes drifted closed.  The echo of his question playing over, and over again in her mind. 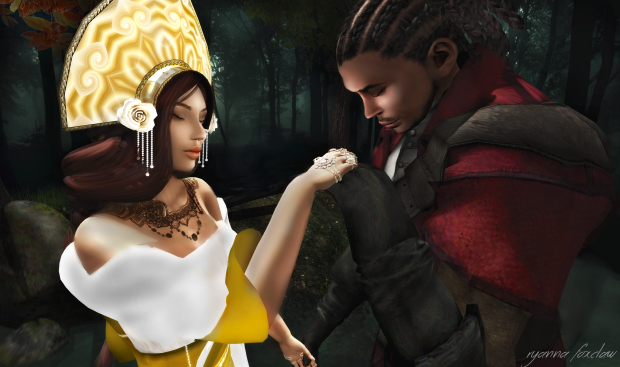