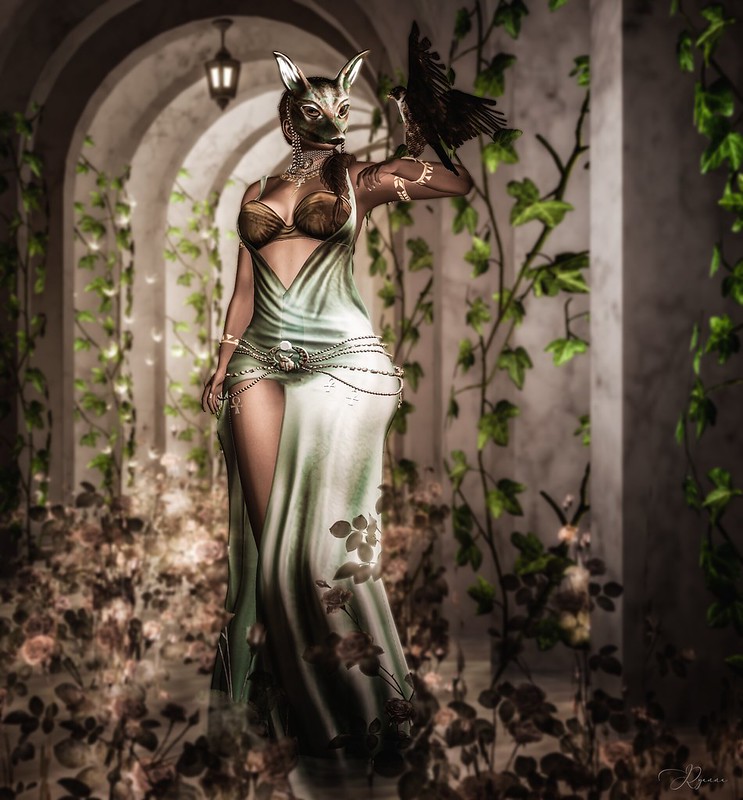 Goddess won’t you hear my call
Will you catch me when I fall
And welcome me into your warm embrace
When comes my time to leave this place.

Can you fell the rocking down in your core?
So come and play this music just a little more . . . 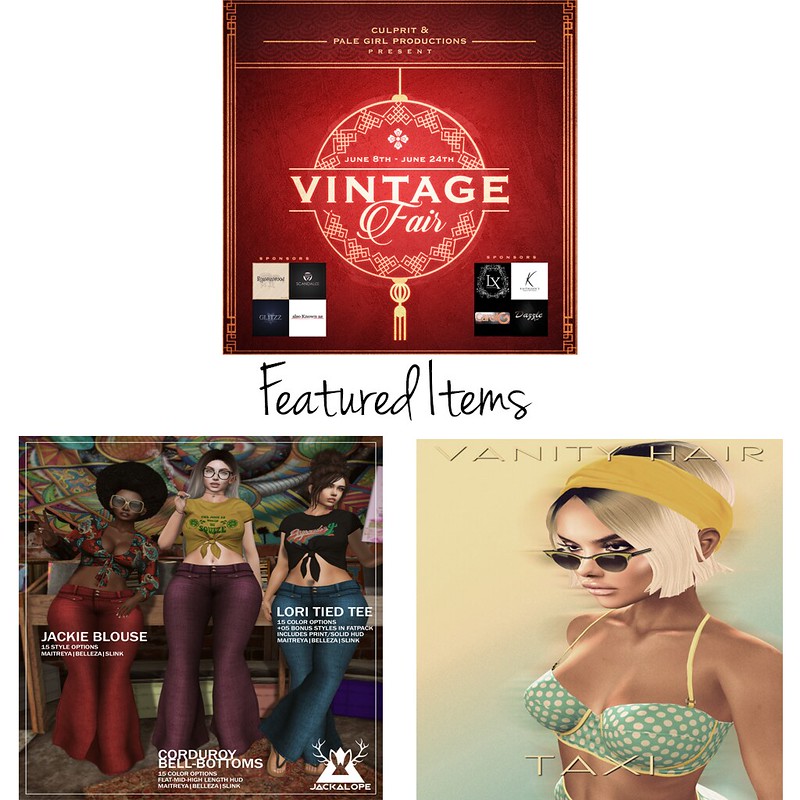 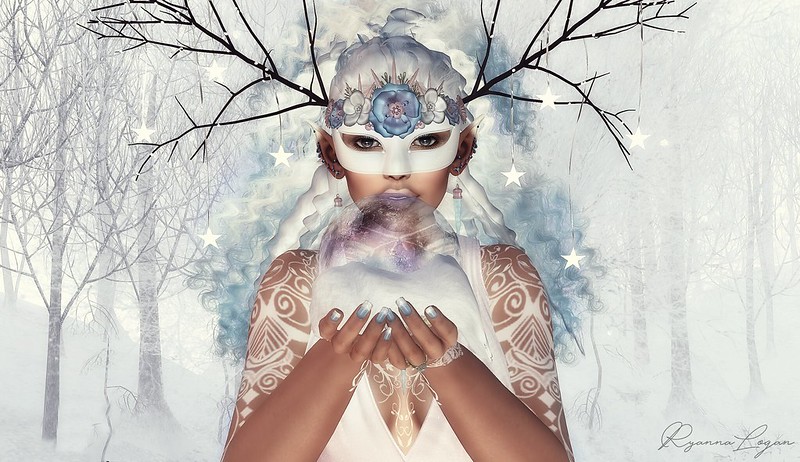 She could see it all
inside the confines of a glass ball.

When her heart, to help, was moved
never would she personally intrude.

Called upon to sit and watch
And though given power to help, she would not.

“It’s not my place to get involved,” she’d say.
“Those things don’t concern me anyway.”

Though her eyes were open-wide
she failed to see.
the damage done to her own being. 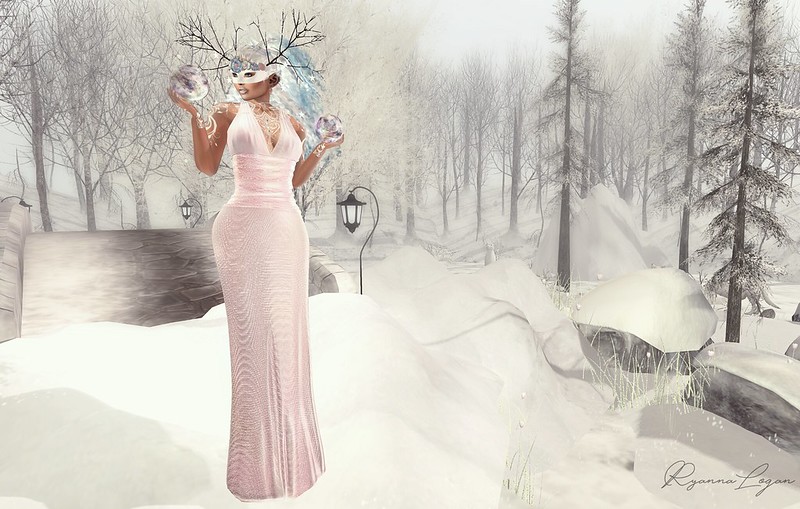 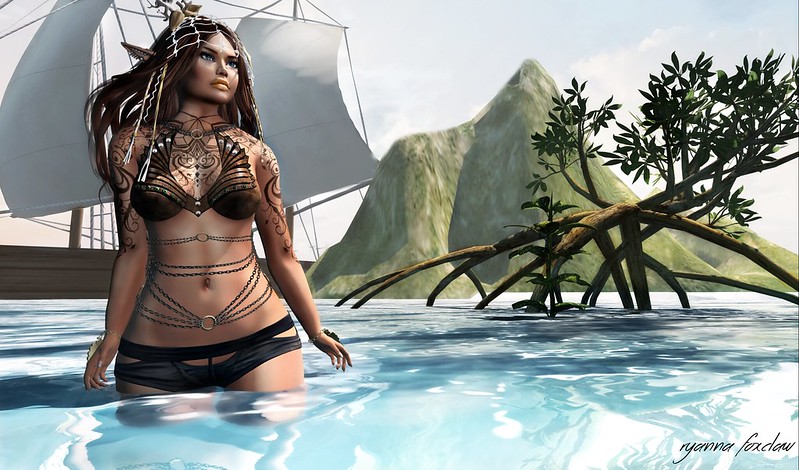 You can find her in the waters
wading in the reefs.
she waits for ships that pass,
and offers sailors relief.

She’ll hold you in her arms
and sing you softly to your rest.
With the strokes of her fingers
you’ll start to weaken.

Too late.
Your soul is now at her behest.

pose:  an lár [poses] The Sarah Series @  The Crossroad Event 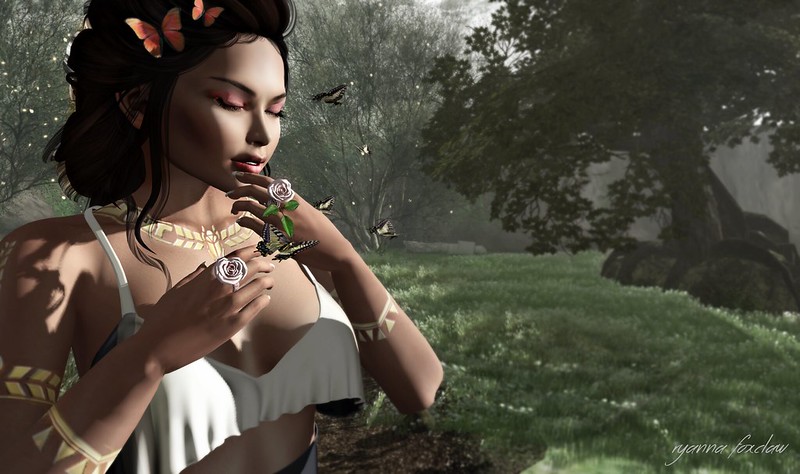 In life there are times where we simply have to slow down. Stop going so fast. Stop trying to cram as many things into the hour as you can. Stop trying to do everything at once.

So much of life is being missed due to the inability to slow down. People spend so much time on the ‘go-go-go’ that they start getting stressed, their nerves go on end, and relationships with others around them can even start to suffer.  We get tired and grumpy, but we can’t stop so we hook ourselves up to a hypothetical caffeine drip so we can keep go-go-going.

“It’s okay, I’ll rest later,” and “I’ll rest once this is done” are common excuses we tell ourselves to justify why we can’t slow down. In some cases this is true – something is suddenly tossed in your lap and it has to get done right away.  That doesn’t happen everyday. That’s not life.

How many things have you missed simply because you were going too fast?  When was the last time you slowed down to enjoy life?

The truth is, sometimes I can be a bit pushy.  I may not seem like much – quiet and recluse – but get me going and I can steamroll a person over.

The truth is, that sometimes I have to be a different version of myself just to make it through situations.

The truth is, sometimes I can’t do everything and I break down like every one else.

But here is something else.

The truth is that I know whatever bad things are going on, there is a brighter day around the corner. Sometimes all you need is a beach, a bar, and drinks with someone you care about, to turn things around.

Wearing:
Broderick ( Check out his blog: A Gentlemen’s Game )

Shalas stumbled as she broke through to the surface from the Underdark. The moon was bright. After having lived a couple hundred years in near total darkness, its light was blinding. Her eyes became like slits as she fumbled forward, navigating the terrain as best she could and putting distance behind herself and any attackers that may be following.

She should have seen this day coming. For weeks now there had been tension between her Drow House, Kil’an’dara, and the High Priestess. Shalas had shown disrespect to the Drow goddess, the Spider-Queen Loth, and that offense was punishable by death. Nothing had happened to her then but, on this day, while she was out, the High Priestess and her followers had struck. Shalas had arrived home to find all the members of her House killed. Even the servants.

Now here she was, alone and on the surface, in a land where all she knew about the creatures here came from stories. Shalas did not hear anyone following. It must be the light, she thought. The shine was hurting her eyes and she used a bit of magic to place a dark cast over her vision.  That was better, at least for now.  She would have to find shelter before the sun came up – stories said its light was brighter than the moons – then she would figure out a plan.

Shot on location at: Forest of Shara

“There is no denying that there is evil in this world but the light will always conquer the darkness.”
― Idowu Koyenikan,

Even when you’re close to midnight
Even when the walls are closing in
There’ll always be a star that’s shining
And the night will never win
Where the light is.” – “Where the Light Is” by Anthem Lights

There is a bit of darkness in all of us. Some call it evil, other people refer to it as sin. Everyone falls short.  Everyone does things that they are not proud of at times.  Everyone finds themselves in a state of despair sometimes.

We were created to be in the light.  We were not made to chain ourselves down to things that are bad for our souls. Simply because things happen in our lives to put us in a bad place it doesn’t mean that we should root ourselves there, in the darkness.

Who among us has done nothing wrong? Is anyone better than the next person?

Pose:
Picture 1: from an lar [poses] The Lina Mini Series @ Enchantment – May
Picture 2:  from Baxe: Pin Up Poses @ Pose Lover – May

Shot on location at : Winter Moon

Once upon a time the world was overseen by two groups of fae: Earth and Air.

The Earth fae ruled over the ground and to them fell the responsibility of bringing life. Without them plants would not grow, and the creatures of the world would starve. Clearly, these fae were the most important of the two.

The Air fae ruled over the heavens. They positioned the clouds and orchestrated the patterns of the sun and moon. Rain and snow would at their bidding and the wind blew in accordance to their instruction. Without these fae there would be no seasons, nor water or sun to give to the world. Certainly they were the most important of the fae.

Days turned into weeks. Weeks became months. Months became years. Without the sun to bring its warmth the world grew cold and, without the rain to wash away impurities, the air grew stale and toxic. Plant life disappeared without the nourishment from the earth. Famine and drought spread over the world and its inhabitants starved. Dry ground cracked in many places causing sections of earth to split away from one another.

Slowly the world was dying and the fairies, too, began to disappear. In spite of this the feud continued.

One day, an Air Fae came to the ground seeking a respite from the toxic air above. The dry earth nicked at her feet and her heart sank at seeing the wasteland all around her. Up ahead she spotted an Earth fae kneeling upon the broken ground. Her initial reaction was to flee before she was seen. She fluttered her wings and rose back into the sky.

“This has to stop.” A voice called after her and she stopped. Of course, it was the Earth fae, looking up at her with sadness in her eyes. The Fae held a crumbled flower in her hand. “Look at what we’ve done to the earth.”

The Air Fae regarded the one on the ground and spread out her arms. “Look at what we’ve done to the sky.” She came back to the ground.

The two of them silently studied the other. They were both fae, even though they looked different, and they shared the same desires. They both were needed for the survival of the world. All of this had started over pride and it was time to make it right. Change has to start somewhere.

“I need you,” confessed the Earth fae as she stepped forward.

“We need each other,” responded the Air fae as she took the Earth fae’s hand.

At once they could feel energy passing between them. It ran through their bodies and out into the ground and sky. Where the two Fae stood, life returned and the sky was cleansed. They were only two, and they couldn’t heal the world alone, but all it takes is two to start a change in the world. From their example others would follow and the world would be whole once again.

Deva (Thanks for posing with me! Check out her blog ‘DevastatingSL’ )
Dress – Maitreya:  Zene Dress in Silver Blue
Wings –  .:Soul:. – Oree
Hair: Lode – Sweet pea
Accessories: Hydrangea on Forearm and Hand in white from *NAMINOKE*
Melide flower vines on arms and legs from *Sweet Kajira*

It was last year when the lady and her courtier had to say goodbye. The time was not right for their indulgences. They were the wrong people. Circumstances mounted up and where the courtier had to go, the lady was not able to follow.

The day before the separation was to occur, the courtier took the lady by the hand and lead her to their secret place. It was decrepit greenhouse. Overgrown with vines and moss, the place had not been cared for in a number of years. Nothing had grown inside for a long time and the floor was a collection of hard packed dirt and rocks. The glass of the house was either mucked over with dirt and moss, cracked or broken. The stone walls – which had to have been quite lovely in their prime – were chipped, crumbling, and missing in many places. Even on the brightest of days the interior of the place was dim as sunlight didn’t reach in very far.

On that day the courtier lead the lady to the center of the green house. Earlier, he had worked a bit of the soil and now it was fresh for planting. Letting go of her hand the courtier knelt down in the dirt, not caring for the stain it would leave on his pants, and pulled a seed from within his jacket pocket. He looked up to the lady and said, “With this seed, life and color will grow again in this barren place. If you have patience, you will see something beautiful.”

Then the lady and the courtier said goodbye.

Each day the lady went down to the greenhouse to check on the seed, and also work on repairing the old building. Doing this made her days a little more fulfilled. After a few months the seed started to grow, but to her surprise more sprouts grew up around the spot as well.  At the end of the year a wonderful rose garden had grown, and the greenhouse was neither dark, nor barren, anymore.

When it was a year to the day that the courtier had left, the lady gathered a few of the roses from the greenhouse.  She stood atop her balcony and looked out over the land. There was a path that lead out into the rest of the world and maybe, just maybe, she dared to think he would appear.

The courtier had been right. She had been patient throughout the year and had seen something beautiful, and she gained something else, too.  Hope.