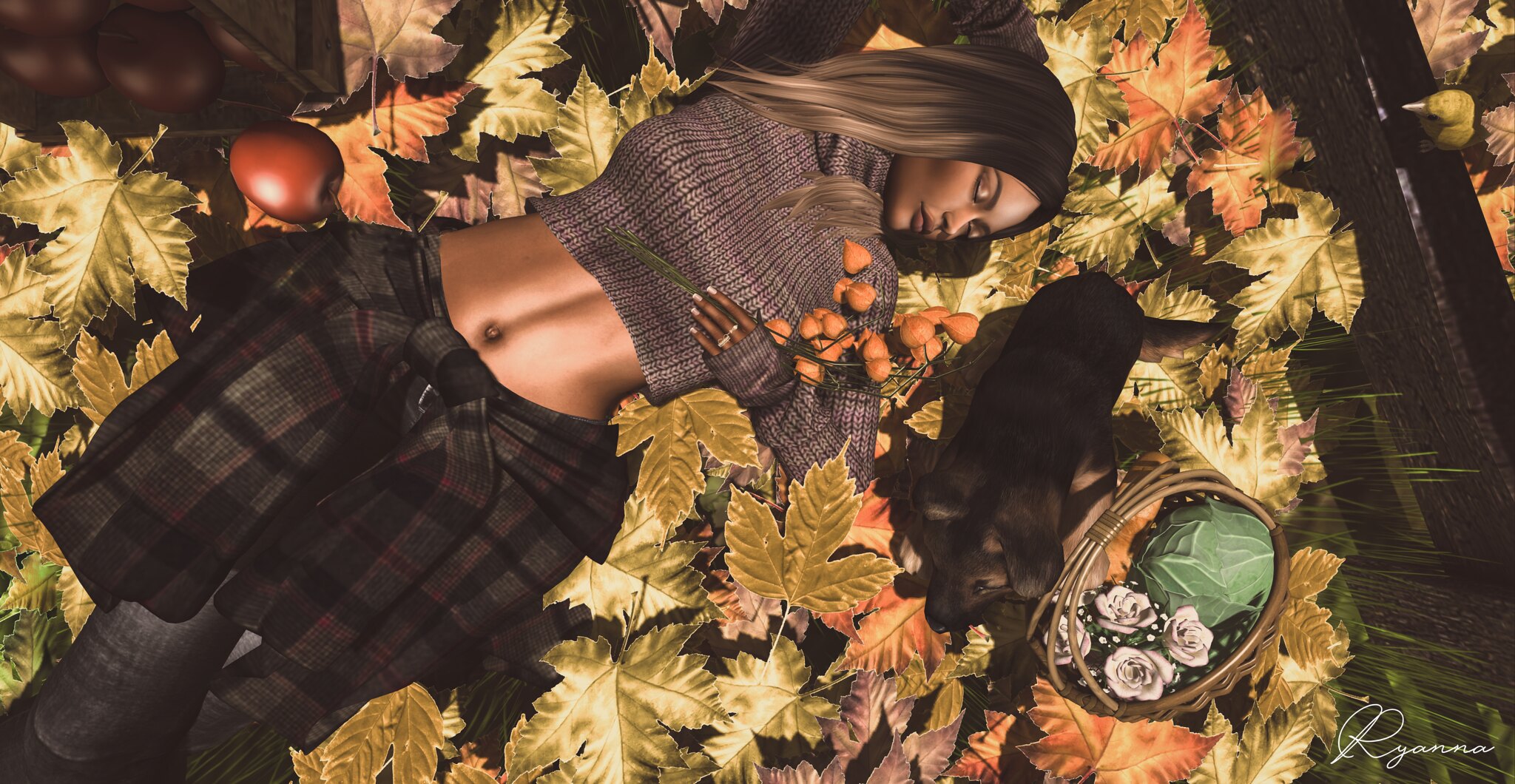 I don’t want to think too much about it
I can’t believe that it might be true
So I’ll just stay here silent and slowly waiting
for all the things I feel to pass on through.

Locked up in my dreams is where it belongs
‘Cause I don’t feel like playing another song. 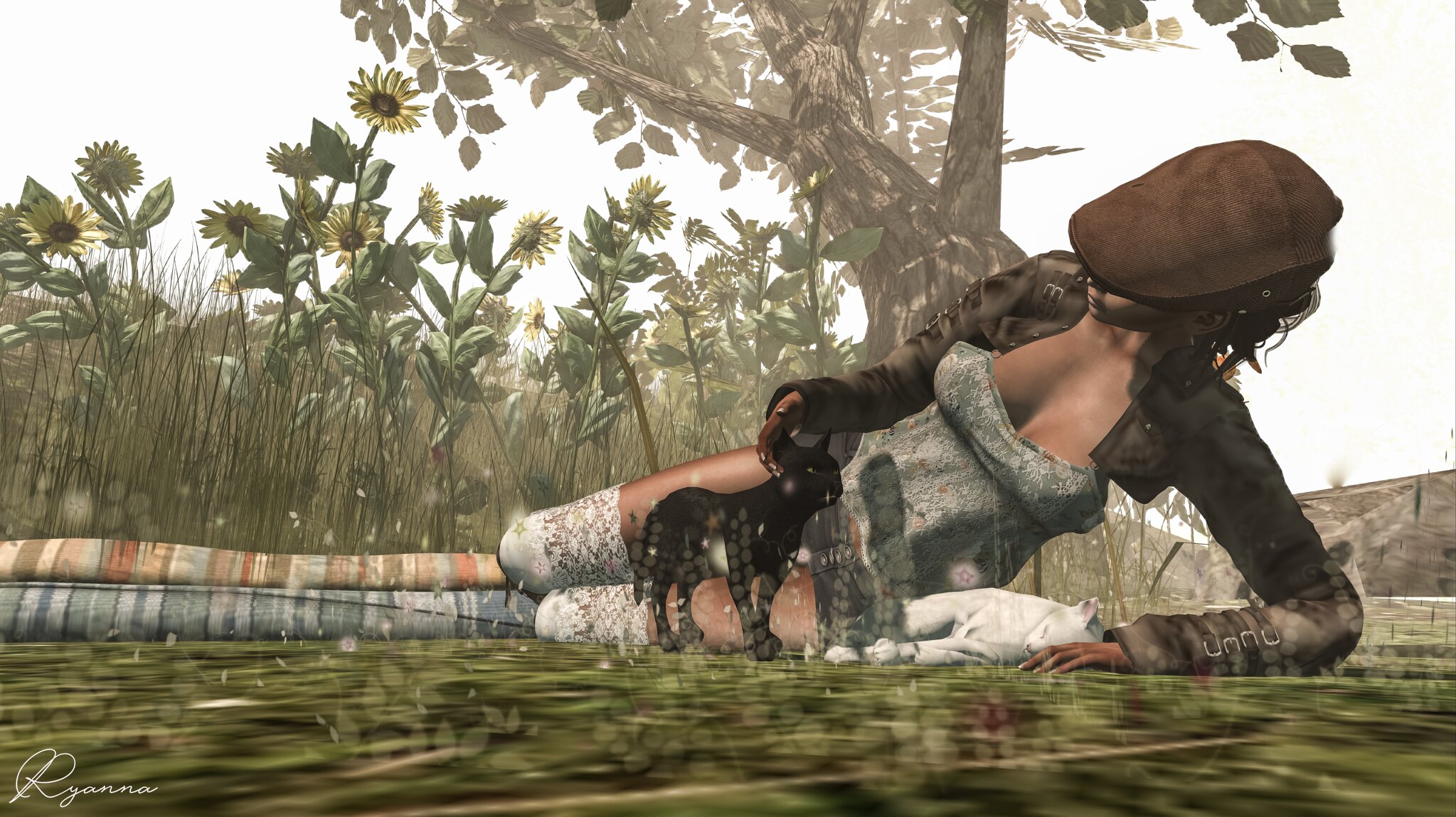 Such a long day it was yesterday.  She had been engaged in so many things it was hard to tell if she was coming or going. Now?  Now she finally had some time to herself and she took her escape to the nearby field.  Autumn was in the air and the colors were changing, but the landscape didn’t look any less beautiful.

She laid with her back to the ground and knees up, one hand under her head. With the other hand she pulled a letter out from her skirt pocket.  Holding it up to the light she started to read it and a smile grew on her face. She already knew what it said as she had memorized the words.  Only thing now was for her to reply.

As she was thinking on what to say she heard a soft mew coming from the flowers.  Looking over she saw a pair of cats walking out and coming towards her. “Have you two come to help me figure out what I am to say?”  She asked the animals as she leaned on her elbow.

They continued to approach.  One took up residence under her propped arms while the other rubbed its hand against her hand.  She looked down at them.  “It is not often that I am loss for words.”  This time she was.  There were things she knew would be nice to say and things that she couldn’t quite get herself to say. The cat’s only replied with a light purr of their own.

She shook her head.  Oh to be as carefree and tranquil as the cats appeared to be.  She would put aside the thoughts of the letter for now. Perhaps she needed to take a life lesson from these animals and be as restful as a kitten. 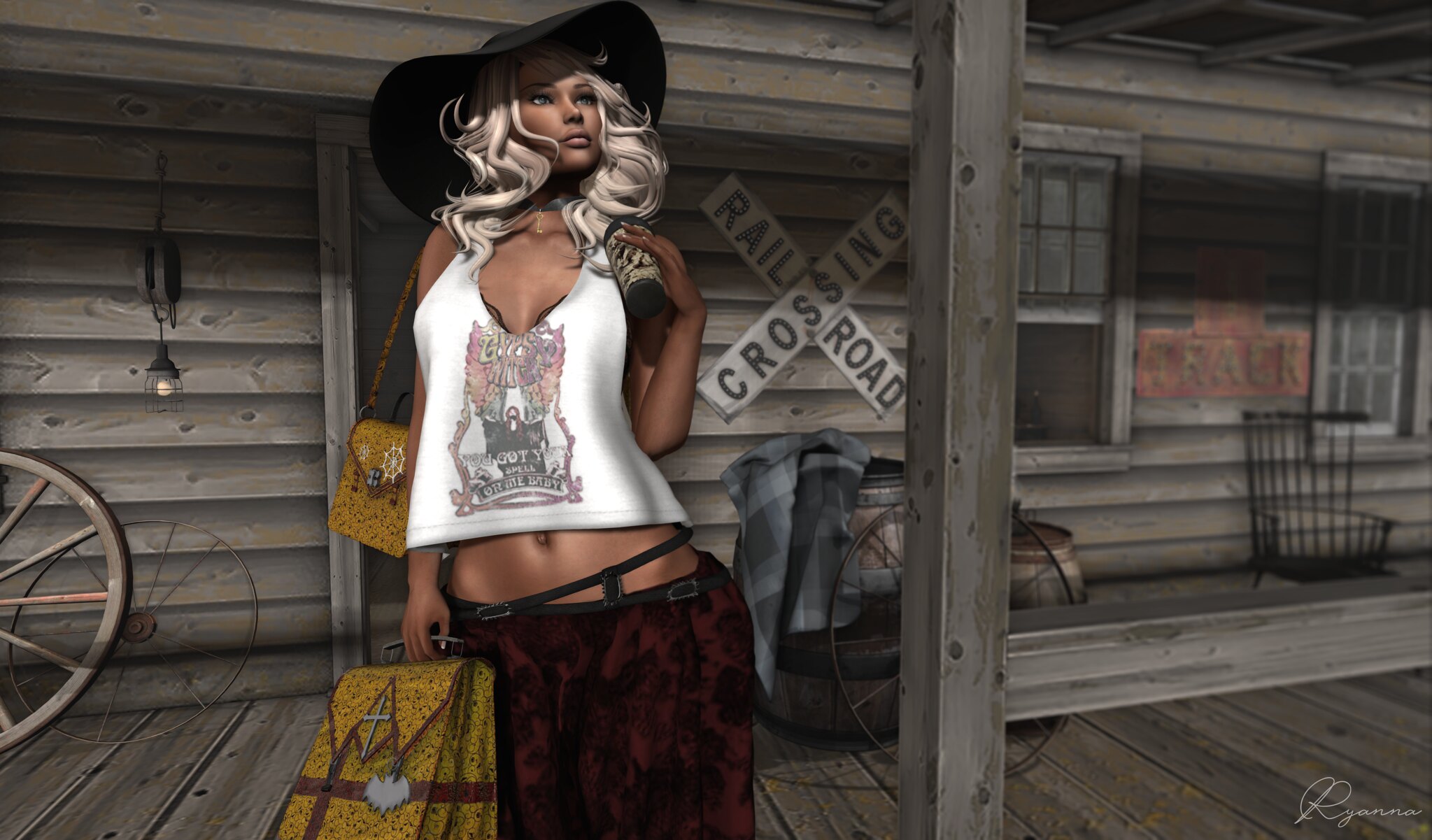 “Last stop!” The train conductor yelled as  the train made its way into the station.  “Last stop! Everyone off!”

It was exactly where she wanted to go – the end of the line.  When she left home she had gotten a traveler ticket, it allowed her to go anywhere the train went, but only one way. That was fine by her.  With the clothes on her back, a small bag, and purse of essentials, she had gotten on the train and took a trip to nowhere.

She got off the train and took note of the name of this city that was now her home. Everything was new. She didn’t know where to start, but this was a beginning, and all beginnings start with the first step. 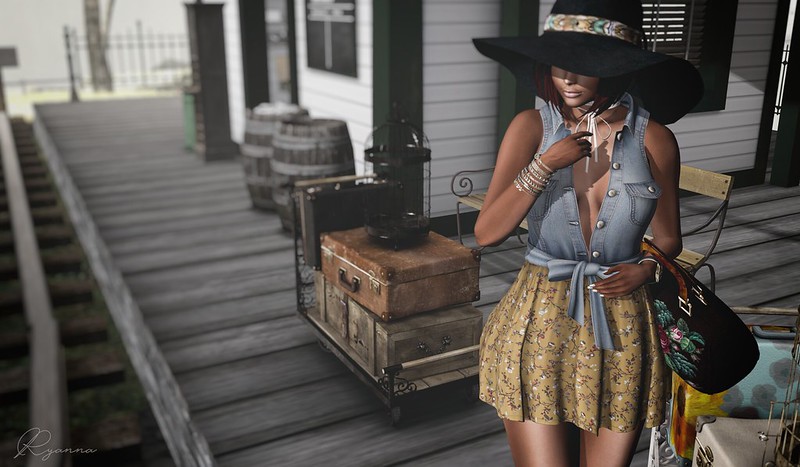 “I’ve found you find strength in your moments of weakness. For once I’m at peace with myself…”

She had been living out of suitcases for a while now, always ready to pick up and leave. Something had always held her back. Not today. Now was the time. Before she could talk herself out of it, she grabbed her bags and left for the train station.

“I’ve lived in this place and I know all the faces. Each one is different but they’re always the same. They mean no harm but it’s time that I face it, they’ll never allow me to change. . .”

It didn’t matter where she was going, she brought tickets to the first train headed out of town that was going to furthest away. She reached in her bag to check her phone, only to remember she had deactivated it and left that behind. She would get a new phone. New city. New place. New phone. New life. . . One thing she couldn’t leave behind were memories, and one of them she carried in the bag with her.

She stepped to the edge of the platform and waited for the train. This was it. This time she would get on the train.

“Maybe forgiveness will find me somewhere down this road. I’m movin’ on. . .”

Inspired by the song, “I’m Movin’ On” by Rascal Flatts 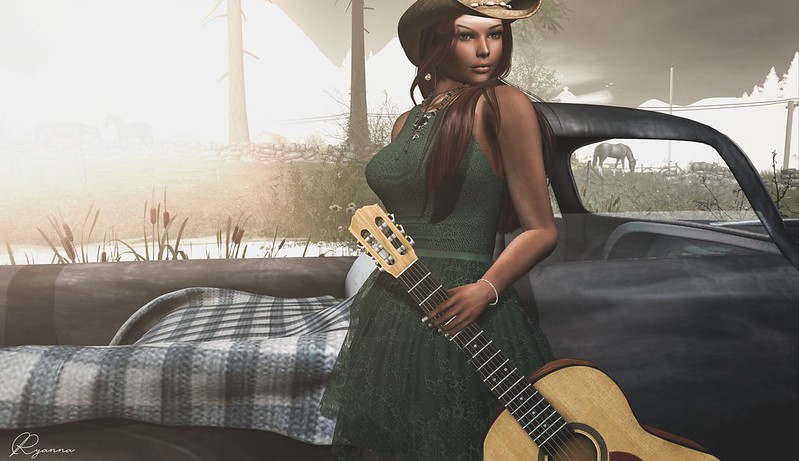 It had been an busy past couple of days. She ran from one appointment to the other. Her days were mini pockets of social gatherings yet she felt that something was missing.

At the end of this day she donned a wide hat, picked up her guitar and slipped away from her responsibilities. Out here, in the fading light of day, she was able to breathe. She had purposefully left her phone behind because she didn’t want to be bothered. This time was for her. Time for her to try and work out the thing she felt was missing.

She found a stationary pick-up truck and leaned there. It was peaceful out here. Pulling her guitar into position she plucked a few random notes and let her fingers walk the cords as they would. Sometimes, one simply had to let go, and play their own song.

“And I’ll spend my life penning my song, my song
And the verse I write will speak for me
Good girls don’t make history
So I may never be what you assume
Don’t want your hooks or auto-tune
If I’m off-key then that’s alright with me
Oh, and maybe you will learn this when I’m gone
My song will carry on . . .”
My Song – Alessia Cara 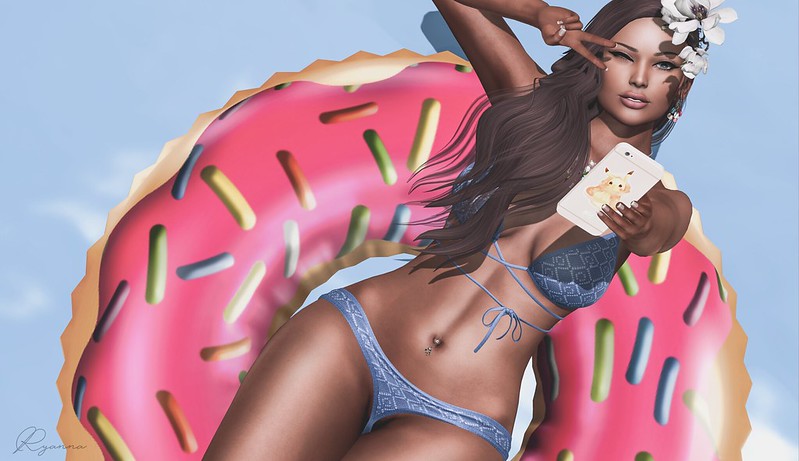 She had just gotten out on the water when her phone rang. Never fails. She let it ring for while, knowing exactly who it was. Eventually the phone went to voicemail and she grinned to herself – merriment that lasted only a moment because the phone rang again.

Pulling the phone out she answered it on speaker and a voice came out from the other side. “You couldn’t wait five more minutes? Five. Minutes.”

“Deadlines wait for no one,” came her cheeky reply. Even though she couldn’t see the person on the other end she had a good feeling that they had just rolled their eyes.

Then the person spoke again. “Where are you?”

“On a donut on the water.” She replied like it was a perfectly normal thing to say.

Laughter came from the phone. “You’re going to get eaten, and I’m going to laugh.”

“You’re going to have to find me first!” Striking a pose she took a selfie,  sent it, and ended the call. 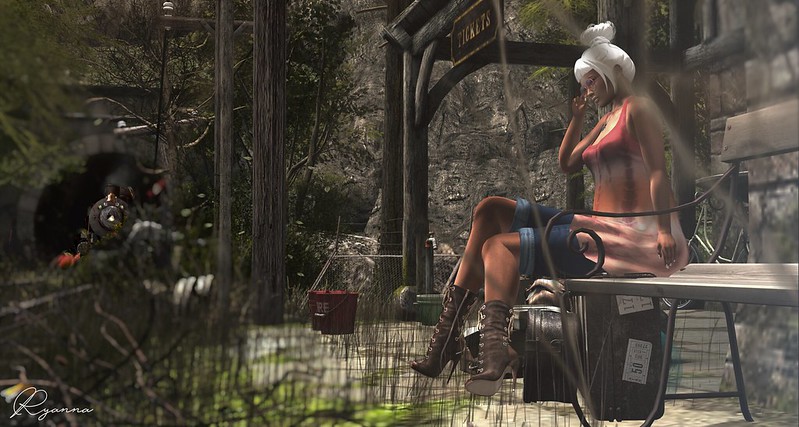 She was going this time, she really was. Two small suitcases were tossed on the bed and clothes were haphazardly tossed in them. She didn’t take time to sort them or see if they matched, if she did then she would think about what she was doing. And, if she did that, she would change her mind again.

“I got my ticket for the long way ‘round
Two bottle ‘a whiskey for the way
And I sure would like some sweet company
And I’m leaving tomorrow, wha-do-ya say?”

The train didn’t leave until tomorrow and the sensible thing to do would be to go home and come back. She couldn’t do that. Instead she sat down by the bench and took out her phone. It took a moment. She tossed the idea back and forth in her head before making the call. They’d come, she was nearly sure of it.

“I’ve got my ticket for the long way ‘round
The one with the prettiest of views
It’s got mountains, it’s got rivers, it’s got sights to give you shivers
But it sure would be prettier with you…”

(Song is “Cups” by Anna Kendrick}