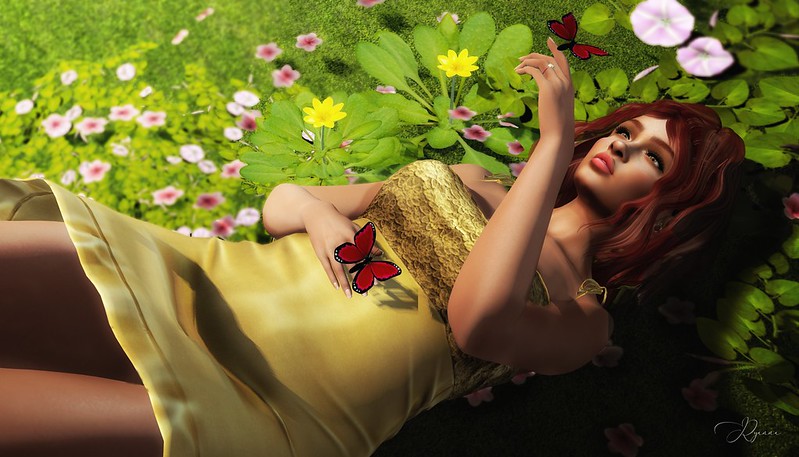 If wishes were horses
Beggars would ride:
If turnips were watches
I would wear one by my side.
And if if’s and an’s were pots and pans,
The tinker would never work! 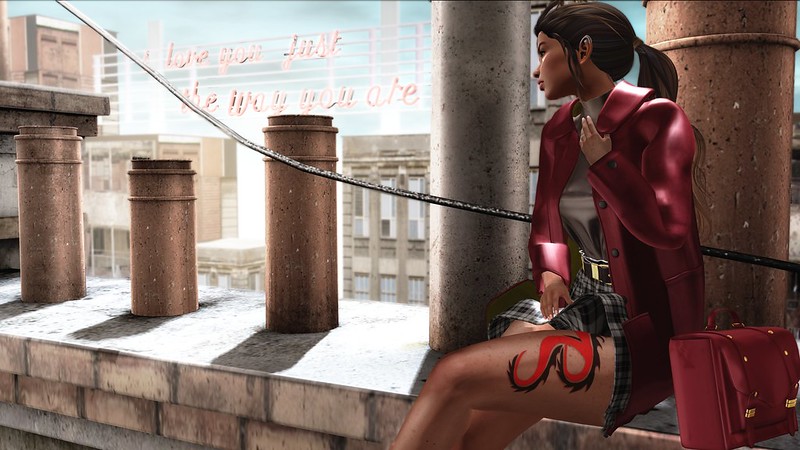 There was something about rooftops – it was one of the places she always found herself going when she needed to breathe. For up here she could see the city and things seemed ‘quite’ in their own way. When she was high up everything below was smaller, even her problems which were ‘down there’ didn’t seem to matter.

It was a particularly bright day today so she sat back along the bigger vents and rested in their shadows. Traces of the sun’s rays hit her, but that was okay. Everything was perfect up here. On the rooftop. 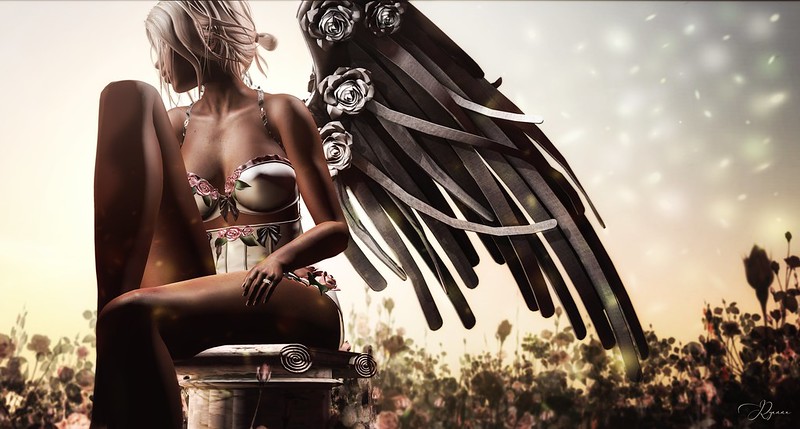 As I look back over my days
Why is it that beautiful things always fade
The blue skies always turn grey
Tell me have the happy days gone away?

There’s magic all in the air
But we walk around like nothing is there . . .
How can we be so unaware
Travelin’ with our heads down, feeding despair.

But there’s a light and it shines in the dark
It’s right there deep down in our hearts.
Don’t turn away even when it blinds your eyes
Watch it grow, pushing back at the night.

You’ll find the hope that was always inside
Create those happy days from the night . . . .

Pose is  from Diversion – Unravel Me Poses 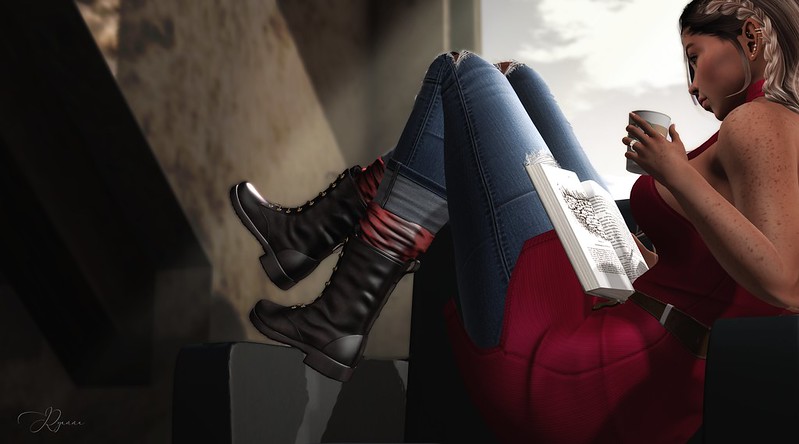 noun: a pause or break.

After a brief int{er}mission we will return you to your regularly scheduled blogging . . . . 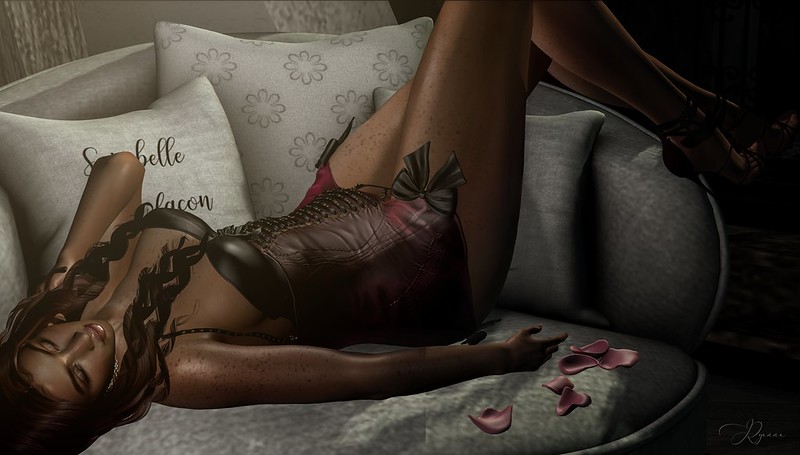 Before the year ends,
Have some fun with me
This is one present
that wasn’t under any tree

Now don’t keep me waiting
The countdown has begun
For when the night is over
So is all the fun . . . 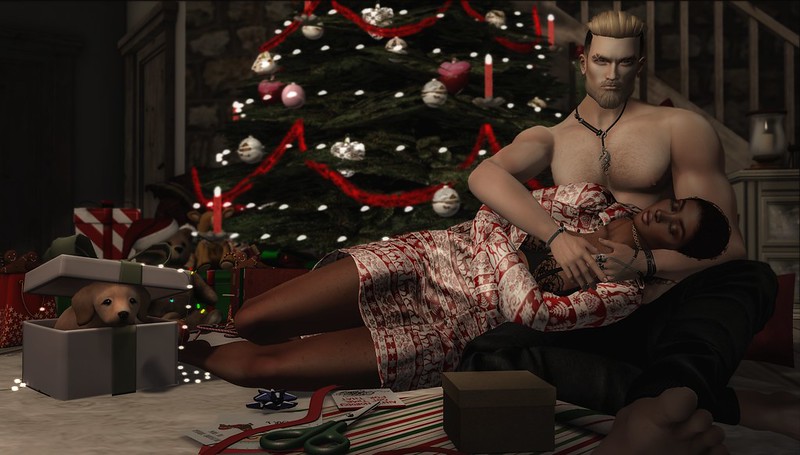 It had been a busy day traveling from one store to the other in order to find the perfect gifts for their friends. Despite his suggestion that they handle all the wrapping in the morning once they had a chance to rest, she was insistent on doing it that night.

For a while she was fine and wrapping went smoothly. Slowly her resolve started the fade away. He noticed her actions getting slower and her focus drifting. He didn’t say anything, nor did he try to prod her off to bed because he knew that in doing so she’d force herself to stay awake. So he was patient and waited for his opportunity.

She was trying to wrap a box and the paper was giving her difficulties. It had to be because she was tired. Normally something as simple as that she could do with her eyes closed. Gently he pulled her against him and took the box from her hands. He made sure she was comfortable and then proceeded to go through the motions of preparing the wrap the present. It wasn’t long after he started that he felt her slipping down his chest. He stopped what he was doing and saw that she was sleep.

He smiled and laid her down with her head in his lap. He had told her she was tired. Perhaps next time she’ll listen. . . 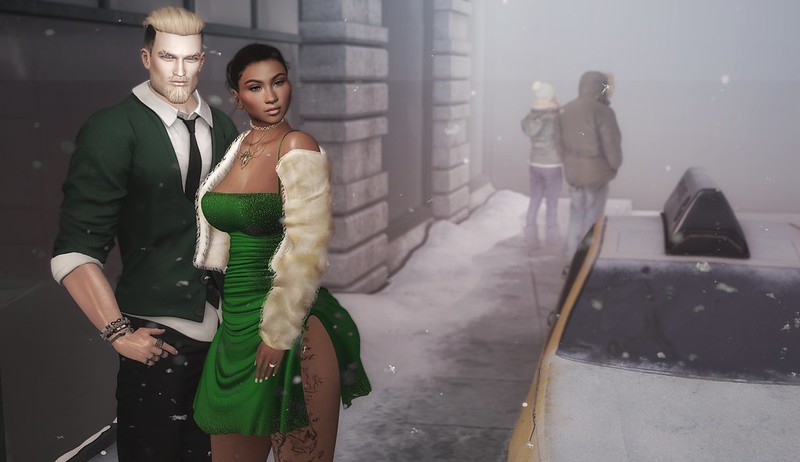 The show had ended and people were filing out of the theatre. Whether in pairs or small groups, all about the air buzzed with the drone of low conversations about the play they had all seen. These two were no exception.

“I say you’re wrong,” Dragon commented as he held the door open for his companion. “It’s quite possible that the finer points of the plot have escaped you.”

She huffed and playfully shouldered past him, dragging a pointed finger across his chest as she did. “Or maybe you’re pulling at theories that don’t exist.” That is something he would do, Foxclaw mused to herself as she stepped outside to the cool night air. “Oh. It’s snowing.” She said, slightly surprised.

He stepped outside after her, the crisp wind jumping at his face as tiny snowflakes found their end on his skin. He looked up, the parade of snow dancing in his eyes. A smirk blossomed on his lips as he turned his eyes to her and placed a hand on her shoulder. “Well, at least you’ve got a pretty solid grip on the obvious.” he said, amusement laced in his words, as he winked at her.

Giving him a side-eye she tugged on the sides of her jacket and started out on the sidewalk. “At least I have a jacket.”

Always cheeky, that’s what she was, and he didn’t mind it one bit. Dragon shook his head as he followed after. “Who said I was cold?” If he was, he wasn’t about to admit it. The car was two blocks away, he could handle it.

They walked the rest of the block in silence though Foxclaw would glance to the side now and again, checking their surroundings. She broke the silence, “I guess tomorrow we’ll – – “

“Let tomorrow take care of tomorrow,” Dragon interrupted. He rested a hand on her lower back when they got to the corner, then moved her closer to him. He knew what she was going to say, but he didn’t feel like bringing work into their evening. . . .

Pose is RK Poses. One direction